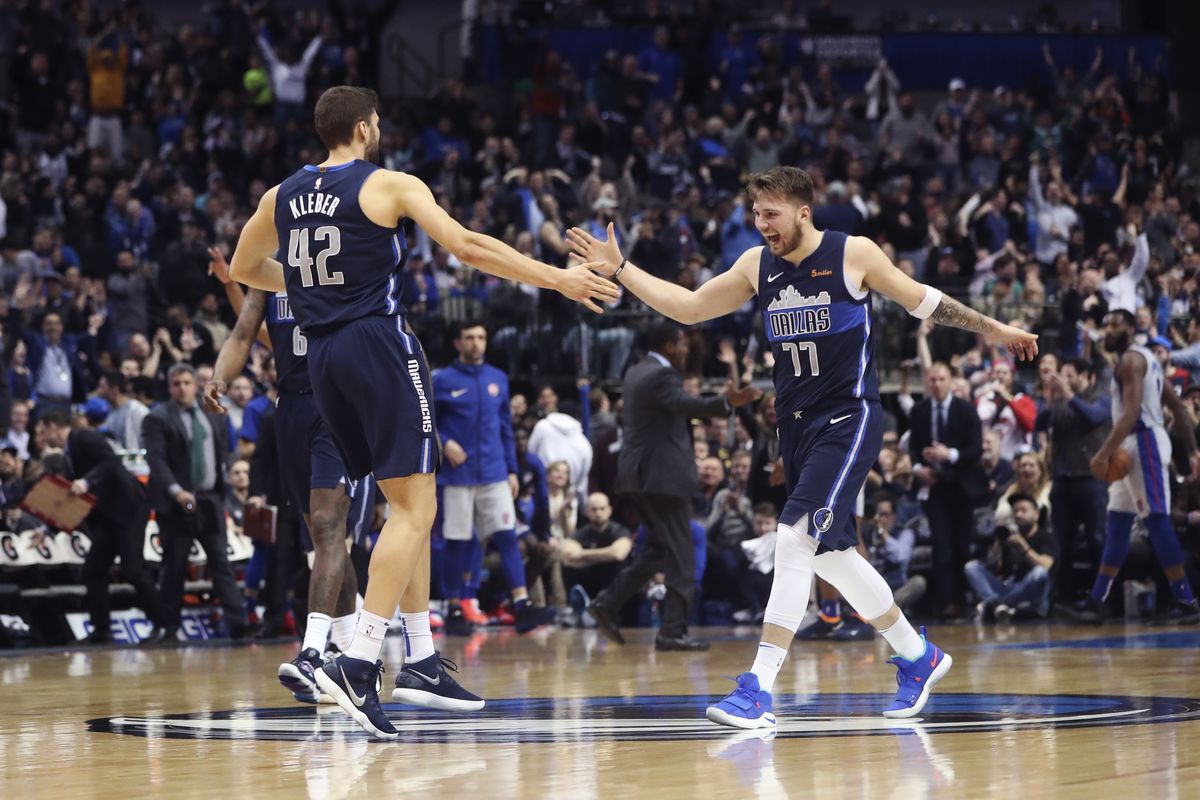 This is a previously written version of the NBA Daily Plug from March 11. Click here to read the most current version.

Note that the Plug is only written for slates with 5+ games and is posted at least 2 hours before lock on game days. Want analysis for every player in tonight's games for your NBA DFS lineups? Check out the Occupy Model.

We know value is important in NBA DFS, so we made two columns in our Occupy Model -- DK Value and FD Value -- to show how much value that player is on each site, as well as a dedicated injury report page. More nuanced advice for your NBA DFS lineups -- check it out:

Join our Discord channel to chat with staff and other members about your NBA DFS lineups.

Tonight’s slate presents us with a top heavy point guard player pool, and it starts with Doncic who is most likely playing without his star counterpart, Kristaps Porzingis. In 12 games without Porzingis this season, Luka has produced 1.72 DK points per minute with a usage rate of 39.2%. We all know of Doncic’s potential at this point in his career and he is just 1.2 APG away from averaging a triple-double without Porzingis. Tonight, he will go up against a stronger Denver defense, but this game is expected to stay tight as it involves two of the better teams in the West. Once Porzingis is officially ruled out, expect Doncic’s ownership to skyrocket and you do not want to miss out as he is currently placed in the Occupy Model as second in OF Index to start the day.

De’Aaron Fox has been on quite a roll himself, and why not continue this stretch in a high scoring affair against one of the worst defenses in the NBA? Fox has produced 38 DK points in each of his last six games and 40+ in four of those games. This game against the Pelicans is expected to be the highest scoring on the night, with the Pelicans sitting as the second fastest paced team in the league. Fox’s price has been hovering around the $8000 range for a while due to his consistent play, which means he is extremely trustworthy in low-risk lineups tonight. This is a position to pay up at tonight and Fox is one of our favorite values.

Josh Richardson is just returning from his concussion tonight, which may hold some people off of him. He should not see any kind of restriction, though, as it was not a physical ailment that he could re-injure. His price remains cheap for a starter and should expect to step right into a key role with Ben Simmons remaining out. Before he got injured, he had three straight games of 27+ DK points and filled the stat sheet on both ends of the floor. Detroit is a team that has been dealing with tons of injuries, giving Richardson a good matchup in his return. At his price and for the minutes he should see, Richardson will be one of the top low-risk options at this position tonight.

Continuing on with Kristaps Porzingis’ potential absence, Tim Hardaway Jr. is another key beneficiary. Hardaway has become a much bigger part of the team’s offense lately, producing 31+ DK points in four of his past five games and attempting upwards of 20 field goal attempts per game at 36 minutes per game. Once Kristaps officially gets ruled out, Hardaway is on our radar as he averages 0.92 DK points per minute with him off the floor and should see minutes in the mid-30’s tonight. If Seth Curry also gets ruled out, this only cements Hardaway as a top small forward option as at this point his averages only increase. Denver has been a top defense all year, but small forward is one of their weaker defensive positions, which gives him an even higher ceiling tonight.

On the other side of the ball, we see Will Barton. Barton had a poor stretch about a week ago, but he's back to his original form producing 38.5 and 36 DK points in each of his last two games. Barton’s price especially on FanDuel gives us a nice spot tonight, and the Occupy Model agrees as it has him as the top FanDuel value play on the night and even one of the top DraftKings values. He has proven himself once already against the Mavericks this season, producing 37.75 DK points in a game while accumulating a double-double. With a thin player pool tonight, he is one of our top small forwards.

The Zion hype looks like it has simmered down in the past week or so, meaning it is a prime time to target him in DFS. After three subpar games against top defenses, Zion has seen his price drop to the $7000’s. This won’t stay so low for long, as Zion has played in 30+ minutes for eight straight games and still averages a usage rate of 30% on the season. In one of the highest scoring games on the slate, look for Zion to bounce back in a big way tonight. He is a top elite PF on both sites, and even ranks as the fifth top FD Value on the Occupy Model.

With Porzingis expected to sit tonight, expect everybody and their brothers to be looking at Maxi Kleber. However, this is chalk you just have to eat. In a 15 game sample size, Kleber averages 29.1 minutes and 27.13 DK points per game. Even going up against one of the best PF defenses, Kleber is underpriced by about $1,000 across the industry. He is our top value play at any position tonight, and the Occupy Model agrees by making him the top value PF on both sites!

The center position is very weak tonight, but Thon Maker showed potential in the last game he played. In this game against the Knicks, Maker played 28 minutes and stayed out of foul trouble. He only shot the ball five times and made one shot (20%). Tonight against a very big Sixers team, Maker should see close to this amount of minutes again. The Sixers have also struggled against big men in the past couple games. Thon is a risky option, but then again all centers are tonight and he is one of the top value plays on the Model that allows us to pay up elsewhere.

Other C Options: Joel Embiid (If he plays with no restriction)

Heat Situation:
The biggest name questionable on the Heat in tonight’s game is Jimmy Butler. If he is unable to play, the top options in his spot would be Bam Adebayo and the two guards in Dragic and Nunn. Bam averages 1.31 DK points per minute without Butler on the floor, and the Heat will heavily rely on him for the win. He would become a top PF option. Dragic and Nunn both average over a 23% usage rate (Dragic = 28.7%), making them both top mid tier guard plays. However, with Nunn questionable as well, this game could very well be Dragic’s for the taking. He would likely see the start in the case that Nunn and Butler both miss time, making him the top mid tier option on the slate.
NUNN AND HERRO WILL PLAY, BUTLER OUT

If Joel Embiid OUT Then play Horford/Richardson/Harris(FD ONLY)
If Embiid misses tonight’s game, the Sixers will look like they did for the past couple games + Josh Richardson. Horford has been averaging 33.5 minutes and 38.31 DK points per game over the last four games without Embiid. He is priced much lower than Tobi on DK, making him a top option on this site. Richardson is returning from a concussion so he should not see any limitations to his game. He is the one Sixers starter who is still priced down, and he is a top play on both sites. Harris did not see much of an increase on FD after scoring 5x+ his current price in four of his last five games. He is a top option on this site.
EMBIID WILL PLAY

If Rudy Gobert OUT Then play Bradley
With Rudy Gobert now questionable, we could get our top center on the slate. Preseason legend Tony Bradley would likely see the start, and he has been going off without Gobert this season. In two games this season without Gobert, Bradley averages 28.5 DK points per game. He would be the top center option on both sites.

With Terry Rozier listed as questionable, this would bump up Caleb Martin and Devonte Graham. In the last game without Rozier, Graham played 35 minutes and scored 45.5. DK points. He would become a top SG option. Caleb Martin also saw the start last game for him, and he played 25 minutes. He would be a value SF tonight.
ROZIER OUT

Tonight we recommend playing 1-2% of your bankroll on a smaller slate that seems to have some key chalk plays if injuries go a certain way. With that being said, we recommend playing 75% of your allocation in cash contests such as double-ups, 50-50’s, and head to heads. In your cash contests, you should build your lineup around the chalk options we highlight in the Daily Plug and the injuries that open up throughout the day. We recommend paying up at the point guard position, while paying down for big men, as the guards have much higher upside in a much stronger player pool. In high risk, we recommend keeping a strong core from your cash lineup, especially on such a small slate. To differentiate a little bit, you can stack the two high scoring games on the night that you can see at the top of the article. Another thing we recommend doing is using other beneficiaries from the injuries that we see on this slate -- check the Model for those plays. Continue to attack the satellites for XFL, MLB Opening Day, and the NBA Millionaire on NBA.