For more information on the Yahoo Bankroll Challenge and to read the recap from each week, click here.

NFL Week 1 is in the books! After a successful main slate, the proceeding single game slates halted my NFL momentum to return my bankroll to where it started the season.

I’m extremely confident in my process, as there weren’t too many curveballs playing NFL DFS on Yahoo for the first time.

Here’s where we sit after NFL Week 1:

Here are some of the strategies I used this week with advice on how to implement them on other DFS sites:

Most of the contest offerings in the <$5 range are single entry/3-max, so this lends itself to creating just a couple of lineups early in the season (until my bankroll grows enough to start 150-maxing). I created 3 lineups, all with roughly $15-$20 in allocation spread among leagues, quintuple ups, and decuple ups (10x). This was my “primary” lineup that had slightly more allocation than the other two: 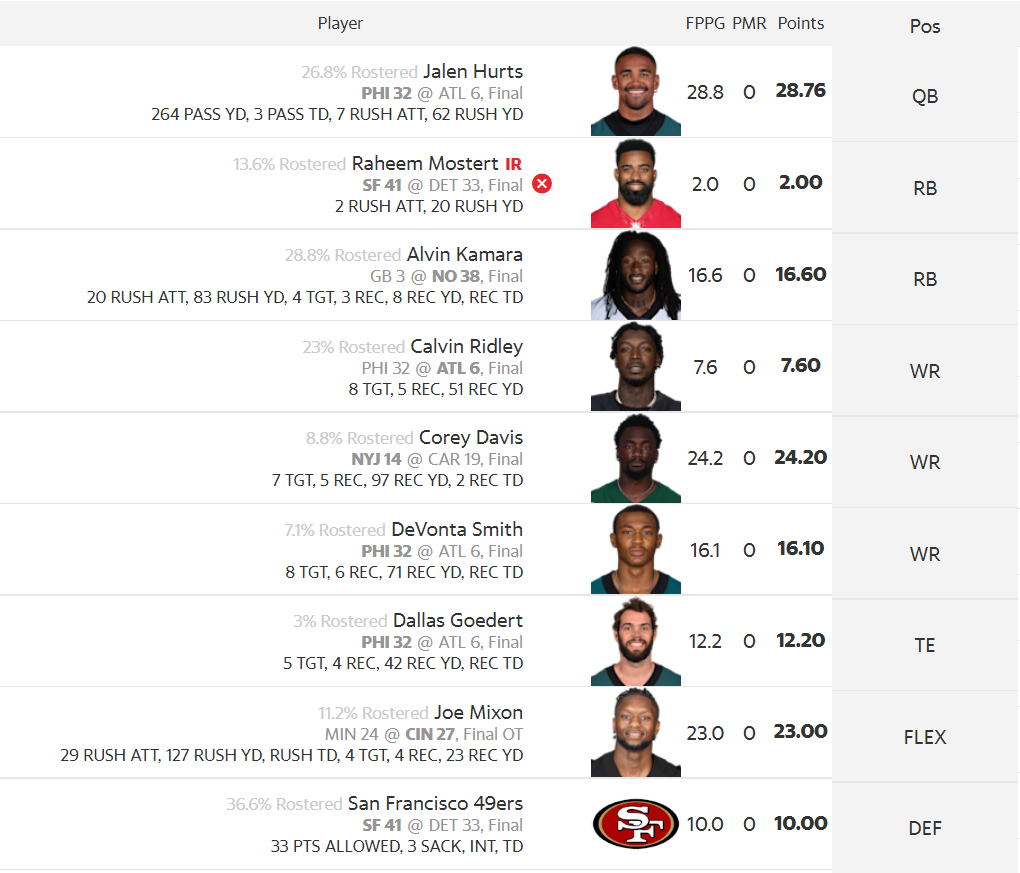 As discussed on last week’s Yahoo RG podcast, my suspicions were confirmed: people definitely don’t stack enough on Yahoo because of the mispricings. While Jalen Hurts was 27% and deemed one of the best plays of the slate, his two primary pass catchers, DeVonta Smith and Dallas Goedert, were 7% and 3% respectively.

Just because the salaries are slightly different doesn’t mean the core tenets of NFL high-risk lineup construction change. I’m even more encouraged to game stack on Yahoo while filling in with “Yahoo values” around the stack.

How to implement this on FanDuel or DraftKings: When in doubt, play small-field contests!

I profited just over $100 on Sunday’s main slate, and I planned on being content with that progress until Week 2. However, Yahoo blatantly mis-sized the $10 single game GPP on Sunday night (and on Monday night to a lesser extent). Even though $10 -- and GPPs in general -- are beyond my bankroll level, I couldn’t pass up the 29% overlay and flat payouts.

I put all of my profit ($100) into 10 entries in Sunday night’s GPP honestly with the hope of just doubling my entry fees. However, my other suspicion was confirmed in that because the single game format resembles FanDuel’s, there’s less of an edge. I cashed just 3 of 10 entries for $60 total.

I then proceeded to airball every single game contest on Monday night and Thursday night, bringing me back to where I started a week ago.

How to implement this on FanDuel or DraftKings: Finding overlay is key to growing your bankroll, but don't go overboard if the entry fee is beyond your usual allocation level.

Raheem Mostert being injured after 4 snaps certainly capped the ceiling of my main lineup, but it still managed to cash in the $5 decuple up for $50.

I plan to increase my main slate allocation this week to a more aggressive level since I was able to predict exactly what the field would do in Week 1. That’s the biggest hurdle for a new site, and since I have a good grasp there, I feel comfortable entering more contests.

As for single game, I’m going to hold off completely unless the overlay is too good to be true.

For any questions about the bankroll challenge, hit up Brian on Twitter. For more information on bankroll management, contest selection, and long-term DFS strategy, read our flagship e-book, The Ultimate Guide.